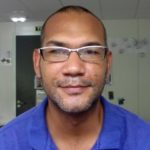 In this article you will read how animal tracks of famous Gabon indigenous animals leaded students to QR coded information that—when scanned—revealed information about the animal.

This blog entry was part of our piloted year-long transdisciplinary theme Sharing the planet with the central idea How we use our planet’s resources has a circular impact on our own lifestyles where we were trying to incorporate the circular economy thinking into this unit.

Hacking through the dense forests of the Gabonese jungle during the early 19th century explorers may have come across the animal tracks of several of the most beautiful animals in Africa. Armed with machetes and muskets, these explorers surely would have been alarmed, but to some degree amazed. Grey Back gorillas, bats and the national bird of Gabon, the African Grey Parrot, are home to these rain forests and we are lucky to be a part of its splendour.

Today, students at the International School of Gabon Ruban Vert traverse the school’s jungle and explore the many animal tracks that have been created by the year 5 class and their teacher. Students are not only able to follow the leopard perched in its tree, but measure the Bongo Antelope print, discover the civet’s behaviour and follow the baby African Bush Elephant’s huge (30cm) imprint. The adult African Bush elephants walk is the longest track and students can follow them over a 2 minute walk. The tracks bridge a gap between the early and primary year’s sections and our youngest students can not resist jumping from one to the other to follow the elephant’s stride. Each track starts with the picture of the elephant and ends with a QR code. The code needs to be scanned to an iPad using pre-loaded QR reader software and this is where the magic happens. Students gather information from the tracks during their unit; stride distance, length of the tracks and even size of the footprints. Data is graphically displayed, analyzed and added, along with reflections and questions that may have arisen during the investigations, to the QR code file. The code generated can be manipulated later to add additional bits of information. Towards the end of the unit students share the researched and sorted information with their peers.

Unlike those early explorers who did not know what was around the next bend, our students are brave risk-takers and their inquiries are rewarded by loaded knowledge about the animal and the tracks they followed.

Jason Patrick Hanslo is a year 5 teacher at the International school of Gabon Ruban Vert, Libreville, Gabon. Jason has taught in PYP schools in Asia and Africa. He joined the International school of Gabon last year as a teacher and outdoor educator. Outside of the classroom, Jason is a tree hugger environmentalist, with a passion to reducing his personal carbon footprint. He not only holds qualifications in geography and anthropology, but is a certified 1st degree Reiki Master.