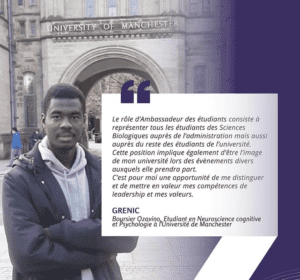 ERV was delighted to hear that Grenic Cinerg has announced his nomination as ‘Ambassador’ for the University of Manchester in the UK. Grenic was an ERV Scholar who was successful in securing an Ozavino Scholarship supported by the Foundation Sylvia Bongo Ondimba (FSBO). Ambassadors help to raise the profile of the University, promote Bradford programmes and help to lead alumni engagement activity in their city or country. The role of comprises a range of activity which can be broadly categorised into four areas; Promoting the University to others in their personal, professional and online networks.

They are also responsible for several tasks that include leading the way for campus groups and assisting staff in student admission or events like orientation. Ambassadors also assist with student recruitment via social media or phone calls. Student ambassadors play an important role in the enrollment decision of prospective students.